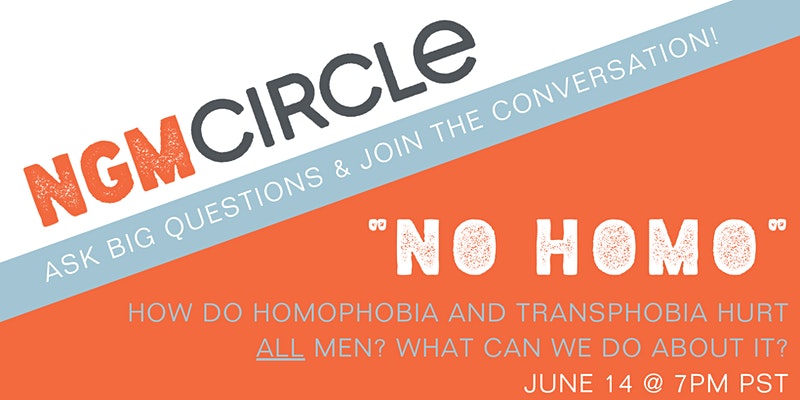 Homophobia is harmful to queer men, but it’s also harmful to ALL men. Let’s unpack why and what we can do about it!

When we were growing up, the most common ways boys were shamed were through gender (“you throw like a girl”) or sexuality (“what are you, gay?”). While youth today are leagues ahead of where we were in understanding and accepting gender and sexual diversity, we have not yet achieved equality & safety for women, femme folks, and all LGBTQ folks.

So what can we do about homophobia and why should ALL men care about it?

Well, it’s up to us to unpack internalized homophobia and transphobia by learning and unlearning! Many of us were taught that any affection between men was “wrong” or “gross” — whether that was physical affection or verbal affection, like showing care, complimenting our friends, or having genuine conversations about difficult emotions. This is especially engrained in anyone who grew up hearing boys preface compliments for one another with the term “no homo”, implying that they were definitely straight, while still wanting to show care for their friend. The anxiety about ever appearing gay was so strong that closeness between friends was compromised.

As a result, we sometimes felt isolated from our male friends — stuck in surface level friendships plagued with anxiety about appearing “too close”.

Yet for so many of us, close & supportive relationships are exactly what we wanted, and still want. So how did we or how do we move beyond these barriers?

How can we challenge and uproot homophobia & transphobia among and between men? How might this benefit everyone?

Join us on June 14th at 7pm Pacific Time!

Hope to see you there!